Home > Resources > Beyond what you see

Beyond what you see

In looking back over the blogs I have shared, they have one thing in common – they’re my perspective. In the current context of Black Lives Matter and a global pandemic, it is more important than ever to understand what’s going on for each other.
This made me reflect on how I could bring otherwise invisible experiences to life, to be a better ally myself and to encourage others to do the same. How do we collectively consider the curiosity, safety and connection we create for each other?

Most conversations we have only scratch the surface and there are things we don’t know or can’t see about each other unless we ask. As you’ll hear in Andrew’s story which follows, letting others in, and feeling safe to be open about who we are, can really make a difference to levels of confidence and even productivity. I am really fortunate to work with Andrew – both in his IT capacity and also as chair of our Lighthouse network which supports LGBT+ colleagues and their families and friends. Even though our paths cross very regularly, I learned so much during our conversation, about him and what I can do differently. Being an ally needs constant learning.

Hi Andrew, thank you for speaking with me today and for agreeing to share your experiences I’d like to start with asking how others describe you?

I think they would describe me as someone who is open, friendly and considerate of others. I’m someone it’s easy to make a connection with, who is knowledgeable and positive.

Is that how you would describe yourself?

Yes, what people see is what they get. When I know someone, I am quite open, I don’t like hiding. I’m an LGBT+ gamer and advocate, who works in IT and enjoys a nice cocktail at the weekend.

I notice that some of that describes what you do. If I was to ask you who you are, would you describe yourself differently?

I would have to say that I’m naturally a very introverted person. What I enjoy is my own space and having a coffee more than going to a party, but I have learned to embrace the extroversion which is needed at work so people don’t know how introverted I actually am.

What does that feel like having to ‘be’ something different at work?

I needed to change quite a lot initially as I couldn’t do my job otherwise. I didn’t want to answer the phone and preferred to communicate by email. Over time it has got easier.

I have become more comfortable and adapted more but there are still times where I say ‘no’, put my headphones in and just focus on work. Before I joined SLA, I listened to a TED talk by Amy Cuddy – Fake It Till You Make It. It takes the old adage of ’Fake it till you make it‘ and expands the concept into ‘Fake it till you are it’.

Be confident for the interview, and then keep that confidence going (even if at the start it’s ‘fake’). Eventually it becomes natural, and that’s what I did – and now I’m not faking it, it’s just who I am.

That must have felt really uncomfortable …

It was, and still is, but I like learning and adapting. By choosing a job which demands it, was my way to become more comfortable. I focus on the opportunity rather than obligation and it then seems less like I’m bending out of shape and more about learning new skills.

What or who has supported you to do this?

My Manager. I was open with him and my colleagues about how this was all different for me (not just introversion vs extroversion, but all aspects of being in a working environment). They helped me where they could, giving me confidence and autonomy to build stakeholder relationships, and importantly they were there to support when I got stuck or needed an initial introduction to someone.

This made all the difference – being more comfortable with my own team in so many ways meant that I could come out to them with more confidence, and really be myself. I didn’t have this before as I didn’t feel that same level of comfort. It’s up to each individual when they share who they are with people, but trying to hide who you are has a serious mental drain.

Small things such as avoiding conversations or bonding with a team for fear of ‘slipping up’, or having to open up more than you want (even something small like ’How was your weekend?’).

Not being out to colleagues for me directly correlated to how introverted I was, making it harder to connect. However as I get more honest with people and come out to them, I become more productive, more open in meetings, and generally more chatty!

Was there anything else which helped you to feel more comfortable to be yourself?

When I joined SLA, the fact that we had openly gay men in senior roles immediately told me that I could be who I am. And having a Lighthouse network told me that that there was support there for me, a safety net of colleagues who share the same challenges.

We are not all in the same position but we do share the drain of having to hide yourself at times – there is a fear of being found out and that takes physical and mental energy to keep up. We can’t hide it but we also can’t go around shouting out that we’re gay. We’re LGBT+ but that’s only one part of us, we’re so much more.

How does your own experience help you to support others?

I remember really well coming out to my parents – my mum knew but my dad took time to get used to it. I’ll always remember the phone call when my Dad chimed in, two years later, with a comment about what his company were doing on LGBT+. I knew then he’d accepted it. We all have different experiences with our families, some are accepting, others are not so lucky. Friends become your chosen family – it’s more than friendship, and one of my colleagues is now my ‘big sister’!

All of these experiences have shown me different ways to support people, from stepping back and giving people space to being closer and more involved. By using my own experiences and how people helped me, I can translate these to helping others.

What would you ask of allies?

Allyship to me is summed up in a quote I took from a training webinar: ‘when someone sees and understands the imbalance for others in terms of opportunity or their experience, and works to correct it’.

This means talking to us, knowing that we are more than an LGBT+ label – we are never just one thing.

Small actions make a big difference, for example, the language you use – talking about partners rather than husbands and wives helps to ‘normalise’ the relationships we all have. And there are bigger thinking pieces you can do too – keep learning, not thinking you know everything, and actively challenging things in the moment.

Even just talking about an LGBT+ news story in a positive light gives a signal and can provide a platform that people can be themselves, and encourages people to come out, or at least be more comfortable being who they are if they aren’t ‘out’ yet.

And what would you say to those who might feel awkward broaching this, who may be concerned that they might ask the wrong question, or find it harder to have personal conversations?

Don’t hold back for fear of asking the wrong question. Ask it once and if it doesn’t land well then don’t ask it again. Just be considerate in your questions – pause and ask yourself whether this is a question you would ask a straight colleague and why you are asking it in the first place.

I’ve never met anyone who would be offended by someone being interested enough to ask.

Social mobility, inequality and fairness: An interview with Dr Louise Ashley
May 24, 2022 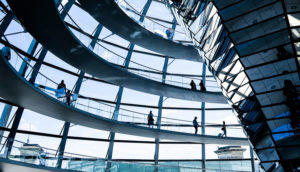