It’s rare that a week goes by without there being something in the news about gender pay.  From the pay differences between film actors and actresses, sportsmen and women, to the recent press coverage of the BBC gender pay gap, it’s big news.  News fuelled no doubt by the legal requirement for all UK based organisations over 250 employees to share their gender pay information before April next year.

And quite rightly. This is an issue that we should be talking about week in and week out, because it’s only through this visibility, prompted by the legislation, that we’ll start to close the gender pay gap.  For far too long, we’ve been in the accepting knowledge that there are too few women in senior roles, and too few women in well paid sectors.  Transparency works, it’s uncomfortable in some cases, it’s unusual in some sectors, but ultimately it’s a catalyst for change.  Because as Zoe Beaty pointed out in her recent article following the BBC disclosure, ‘millions of pairs of narrowing eyes make any inequality more difficult to ignore’[1]

But I also think it’s important to be clear what we’re talking about.  The gender pay gap is not the same as unequal pay.  It’s been illegal in the UK to pay men and women differently for the same job (or similar jobs, or work of equal value) for over 40 years.  The gender pay gap, or the difference between average earnings of men and women, is a broad measure of levels of equality in the workplace, or industry, or country.

Imagine you have two TV co-presenters sat on the same couch presenting the same show every day, with the same credentials and experience.  If one is paid more than the other for doing that show, it’s an unequal pay issue.  But, if behind the scenes, all the runners for the show are women and the senior producers are nearly all men – that’s a different kind of issue.

Companies that have senior (higher paid) roles dominated by men are likely to have a gender pay gap.  However, this doesn’t mean they aren’t paying men and women equitably for the same job.  So while it’s critical (and lawful) that men and women receive equal pay, this won’t necessarily wipe out the gender pay gap. 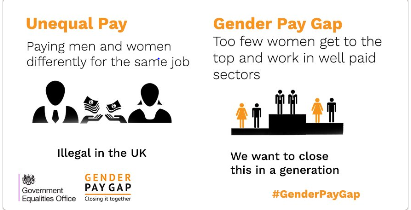 Both unequal pay and gender pay deal with pay disparity, but they are two distinctly different issues, and should be addressed in different ways.  Taking all the necessary steps to make sure all employees are compensated fairly and regularly checking against this, should sort unequal pay issues.

Closing the gender pay gap can be more difficult – it’s about identifying the underlying causes for low female representation in senior positions, and addressing these.

It’s a complex issue with a variety of overlapping causes, and so it’s unlikely to be successfully tackled by one initiative or activity.  It’s about really understanding what’s going on for women, and then having a variety of routes to level the playing field.  This isn’t straightforward, and it won’t happen overnight, but without transparency and honesty about where organisations are and what they are doing to improve the situation, it wouldn’t happen at all. 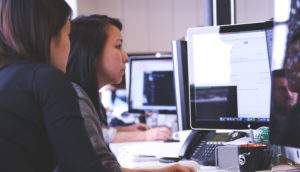