The curious case of diversity dividend – How diversity links to performance

In June 2017, the Women in Governance Roundtable, the only all-female annual governance meeting that brings together female board directors of listed companies and investors will for the first time take place in the UK.

“Diversity may not only have an impact on historical operations as expressed through earnings, but also on investors’ perception of a firm’s future performance.”

The tradition of this annual gathering was established in the US as an acknowledgement of the importance of support and mentoring of female executives and investment professionals. I had the opportunity to participate in the event in New York in 2016 and am looking forward to a different but equally distinguished crowd in London this year.

But why should we care about diversity? Nine times out of ten the first question of an investment analyst would be whether it makes a difference to performance. Many researchers have attempted to investigate the correlation between diversity and performance.

The widely referenced 24-page McKinsey study Diversity Matters (2015) covers 366 public companies in the US, Canada, the UK, Brazil, Mexico and Chile. It concludes that companies in the top quartile for racial and ethnic diversity are 35% more likely and those in the top quartile for gender diversity 15% more likely to have financial returns above their respective national industry median based on measuring earnings before interest and tax (EBIT).

In the UK, for every 10% increase in gender diversity, EBIT rose by 3.5%, according to the study.  However, this is by no means the only research. Using data from 4.4 million firms across 34 European countries, the Gender Diversity in Senior Positions and Firm Performance: Evidence from Europe (2016) report by the International Monetary Fund reveals that companies with a large share of women in senior positions have significantly higher return on assets (ROA).

This means that by replacing one man with a woman in senior management or the board is associated with 8 to 13 basis points higher ROA.

Half way across the world in Singapore, using data from local listed companies, the Monetary Authority of Singapore (2012) 270-page staff paper Is Board Diversity Important for Firm Performance and Board Independence finds that gender and ethnicity is positively associated with quality of firm value as defined by Tobin’s Q[1], taking the analysis one step further than McKinsey by measuring financial market performance beyond firm-level financial metrics.

This is an important step in recognising that diversity may not only have an impact on historical operations as expressed through earnings, but also on investors’ perception of a firm’s future performance.

To expand our understanding of how diversity could mean in other aspects of performance, the 2015 academic paper Gender Diversity and Fraud provides culturally-specific insights.

A review of over 1,422 fraud cases in China led the paper to conclude that to minimise securities fraud the optimal percentage of women on boards is 50%. In male-dominated industries, the impact of women is even stronger when it comes to mitigating the frequency and severity of fraud.

The study of diversity is becoming more interesting due to new available data and more importantly, analysis of various issues through new lenses.

So what should we try to focus on from here? Would it be ethnic diversity in relation to turnaround performance? How about diversity of background and expertise in relation to revenue growth of new businesses? It is a brave new world and it is up to us to decide how to embrace diversity. 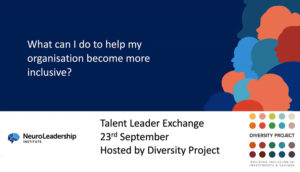