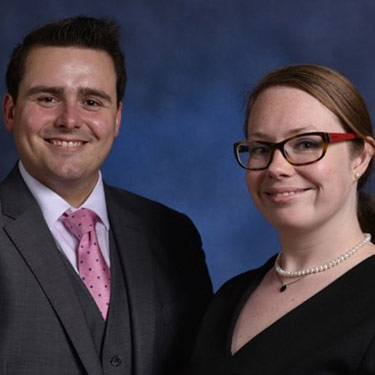 Matt was brought up in Somerset and attended Bristol Grammar School, before going onto study Maths, Operational Research, Statistics & Economics (aptly nicknamed the “Conversation Killer”) at Warwick University. Rachel has lived in Scotland, Somerset, France and Belgium, and studied Law and French Law at the University of Exeter and the University of Rennes. She then worked as an investment funds lawyer in London and Jersey.

Matt is a nosy problem solver – he loves helping people resolve complex issues in their finances so that they can relax and concentrate on the things they truly value. That is what drew him into starting his own business as a financial adviser four years ago, after seven years in corporate banking in London and offshore. Rachel joined the business a year later, and they now run a successful financial advisory practice in Exeter with a team of eight people.

In our spare time we both enjoy horse riding and are avid rugby fans, although we have a beautiful little girl called Pippa who ensures that spare time is a rare and valuable commodity!