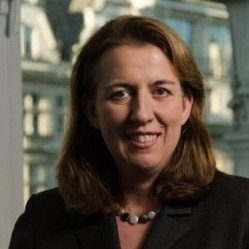 I’m originally from France, have dual British/French nationality, and have lived 20 years in the US, but not all at once. Having moved over 20 times growing up, including 4 times across the Atlantic by the time I was 30 years old, adapting to changing environments is a pretty normal thing for me. I speak French and English fluently.

I originally went to Cornell University to become a veterinarian; however, business management and finance soon became my area of interest and so my career in financial services began when I joined Merrill Lynch in New York after graduating in 1994.

When I came to London from San Francisco in 2002, I was disappointed to observe the significant challenges that lay ahead for members of the LGBTQ+ community in financial services. After being both a witness and a victim to discrimination in the workplace, I finally decided to do something about it when I joined Capital Group as an Investment Director in 2105. I remain passionate about promoting LGBT interests in the workplace, being a mentor, and encouraging better practices wherever possible to avoid unconscious bias or discrimination.

When I’m not busy flying off somewhere for work or leisure, you might find me rowing on the Thames with the Thames Rowing Club.