Pension schemes take note: The Pensions Regulator – the main regulator for trust-based schemes -has now announced that diversity will, alongside Trustee Knowledge and Understanding (TKU), be a key focus for TPR in its future work on the vital topic of scheme governance.

This will likely include a new approach to supervision and enforcement of scheme activity on diversity.

This announcement from TPR came as part of its work on Future of Trusteeship and Governance, the next stage in its 21st Century Trusteeship campaign to raise standards among pension scheme trustees.

In its paper, TPR noted the need for greater industry guidance on trustee diversity and committed to a continued focus on supporting more diverse boards.

The need for further real-world, take-away-and-use guidance was something that the PLSA had been keen to see for some time so we were delighted to work with Travers Smith to produce our Diversity and Inclusion Made Simple Guide which was launched at our 2020 Investment Conference and discussed during our panel on the subject of “Is All Diversity Created Equal?. specifically designed to give step-by-step practical tips to schemes on how they can recruit and – just as importantly – retain diverse trustee boards.

Greater cognitive diversity is not the silver bullet to effective decision-making by schemes. Similarly, voluntary guidance for any sector or group, on any issue, is likely not enough in itself to change the behaviour of each and every relevant individual and organisation.

But we are hopeful that this guidance – the first of its kind directly targeted at pension schemes – will play a key role alongside the influencing and advocacy work undertaken by the PLSA, The Diversity Project, and other industry participants and enable the creation of diverse trustee boards which can more effectively act in diverse savers’ interests. 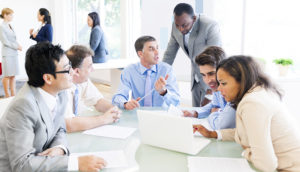